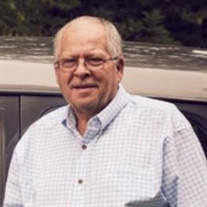 NEW SALEM, GA: Allan Lee Bradford, 72, passed away on the morning of March 23, 2021 with his wife of 50 years and his daughters by his side. Born in Tacoma, Washington in 1948, Allan led a life of service and honor. Allan served in the U.S. Army 11th Calvary. He was awarded the Purple Heart, the Army Award of Valor and two Bronze Star medals during his time serving in the Vietnam War. After his time in the Army, Allan resided in Denver, Colorado where he met his wife and enjoyed fishing, camping and hunting and ran his own business. Allan relocated his family to his hometown and reunited with his four brothers, sister and parents in 1986. Service continued to be the fabric of his life as he was elected Dade County Commissioner of District 4 Lookout Mountain in 2000. Allan is known throughout his community for his love, encouragement and service to others. He was an honored member of the Dade County American Legion 106 and worked diligently to support the Legion and to honor others in times of need. He was a champion of Veteran affairs. He was an attending member of the New Salem Baptist Church and loved his church family. Allan has been honored with countless awards for his service and has made a lasting impact on his community and the lives of every person who knew him. Allan was proceeded in death by his father and mother, Fred and Ruth Bradford. Left to cherish his life are his wife, Kathy Bradford; three daughters, Shelley (Nick) Vaccaro, Julie (James) Schoomaker, and Melissa (Chris) Christiansen. Grandchildren; Remington and Annalee Vaccaro, Everett, Carter, and Cash Christiansen, Isabel and Brad Schoomaker. Brothers, Melvin (Martha) Bradford, Gilbert (Donna) Bradford, Dennis (Renita) Bradford, Gregory (Carolyn) Bradford and sister Julia (Ronald) Morgan. Funeral Services will be held at 12:00 on Friday, March 26, 2021 at the Dade County Court Facility (255 W Crabtree St, Trenton, GA). A come and go visitation will be held on Thursday, March 25, 2021 from 4:00 – 8:00 PM at Moore Funeral Home in Trenton, GA. He will be laid to rest at Hawkins Cemetery in New Salem with full military honors. Guests are requested to wear masks, social distance and limit visitation time to respect protocol for Covid. The service will also be live-streamed by Moore Funeral Home at www.discoverdade.com/moorestream. Those wishing to send online condolences may do so at www.MooreFHS.com. Donations in Allan’s honor may be mailed to the American Legion at: American Legion Post 106 PO BOX 305 Trenton, GA 30752 The family would like to thank the nurses and doctors at Memorial Hospital who labored so hard to save Allan’s life.

NEW SALEM, GA: Allan Lee Bradford, 72, passed away on the morning of March 23, 2021 with his wife of 50 years and his daughters by his side. Born in Tacoma, Washington in 1948, Allan led a life of service and honor. Allan served in the U.S.... View Obituary & Service Information

The family of Mr. Allan Lee Bradford created this Life Tributes page to make it easy to share your memories.

Send flowers to the Bradford family.