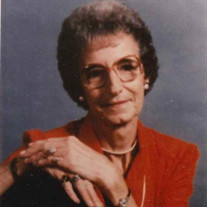 Elva Virginia Townson, 92, passed away peacefully on Monday, January 10, 2022 at the Dade Health and Rehab Center in Trenton, GA. She was born on December 12, 1929 in Guntersville, AL where here family lived at the time. Elva attended school at the Rock School in Dade County, GA after her family moved to Sand Mountain. She was the second oldest child and the oldest daughter of Guy and Virgie Townson. Having no children of her own, Elva felt like a mom to the younger nine children. She would often buy gifts and allow them to live with her once she became employed and moved out on her own. Elva even moved from time to time to help brothers or sisters during difficult times of their lives. Elva began working for 3M/Coors January 1953 and worked for 40+ years of her life with them until she retired. She was a member of Straightway Baptist Church in Bryant, AL. Her greatest joy in life was to be around her brothers and sisters at the lake, under the shade tree, or anywhere else she could get them to gather. As long as she was able, she enjoyed working in her yard and keeping her grass in tip top shape. She loved to treat her nieces and nephews like her own grandchildren and often had them stay overnight, carried them on adventures, or spend the day at an amusement park. Her mission was to send greeting cards to everyone for birthdays, anniversaries, or other life events. Elva was preceded in death by her parents, Guy and Virgie Townson; four brothers, Kenneth (Martila), Freeman (Betty), Royce Ray (Ruth) and Jimmie Townson; three sisters, Reba (Lee) Manson, Lottie (Charles) Douglas, and Judy (Tim) Knight; and brother in-laws, Wes Kennemore and Royce Cloud. Survivors include sisters, Mavis Kennemore and Betty Cloud; brother, Jerry (Vicky) Townson; a host of nieces, nephews, great nieces and nephews and also great-great nieces and nephews along with a host of friends and other family members. A special thank you goes out to the doctors, nurses and staff of Dade Health and Rehab as well as Tapestry Hospice for their care and dedication during her last days. Funeral services will be at 4:00 PM ET on Wednesday, January 12, 2022 in the Bryant Chapel of Moore Funeral Home with Brother Gary Bone officiating. Pall bearers will be Chris Floyd, Justin Lloyd, Darrel Townson, Germi Cloud, Japeth Randolph and Corey Brooks. Visitation will be held Tuesday, January 11, 2022 from 4:00 – 8:00 ET and Wednesday from 12:00 – 4:00 ET. Visit www.MooreFHS.com to share expressions of sympathy and view her memorial tribute.

Elva Virginia Townson, 92, passed away peacefully on Monday, January 10, 2022 at the Dade Health and Rehab Center in Trenton, GA. She was born on December 12, 1929 in Guntersville, AL where here family lived at the time. Elva attended school... View Obituary & Service Information

The family of Elva Virginia Townson created this Life Tributes page to make it easy to share your memories.

Send flowers to the Townson family.