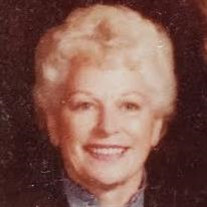 RISING FAWN, GA: Frances Joan (Ray) Hawes, 88, passed away peacefully at her home on Lookout Mountain in New Salem, GA on September 24, 2019 after a battle with Alzheimer’s and diabetic complications. Joan was born on April 17, 1931, daughter of the late Baxter and Katie Butler Ray. She was one of four to graduate from Cedar Grove High and was a 1948 graduate of former McKenzie College in Chattanooga, TN with a degree in Business. She retired as secretary for the Dade County School System after many years of service. She worked as secretary and editor for the world-renowned potter, Charles Counts and was instrumental in publishing the book “Common Clay”. She worked to establish a band boosters club who raised money for band uniforms and expensive equipment. Joan believed in community. She was a founder of the New Salem Improvement Club that purchased and established the New Salem Community Center, petitioned the State of Georgia for a grant to provide water service to the community, built the ball field and provided lighting, and raised money for the New Salem Volunteer Fire Department that provides rescue and fire services. She enjoyed her work supporting the administrative staff and providing special education testing to the children of Dade County schools. She touched so many lives with her giving spirit and welcoming smile. Joan never met a stranger. Her home was always open to family, friends, and students that came to the mountain from all over the world to study at the Pottery Shop. She is survived by her husband of seventy years, Ernest Hawes, son Anthony Hawes and his wife Dale (LeCompte) Hawes, daughter Diane Hawes, and daughter Alecia (Hawes) Najarro and her husband Ruben Najarro, granddaughter Chelsea (Najarro) Masterson and her husband Stephen Masterson, great-granddaughter Emma Paige Masterson; brother William (Bill) Ray, and a host of extended family and friends. Funeral services will be held at Moore Funeral Home Trenton Chapel on Friday, September 27, at 1:00 PM with Reverend Chris Ray officiating. Interment will follow in the family lot of Hawes/Getter at Lake Hills Memorial Gardens, Trenton, GA. The family will receive friends at the funeral home on Thursday September 26, 2019 from 4:00 PM until 8:00 PM and on Friday from 11:00 AM until service time. You may share your thoughts and condolences online at www.MooreFHS.com. Funeral arrangements made by Moore Funeral Home, Trenton, GA

RISING FAWN, GA: Frances Joan (Ray) Hawes, 88, passed away peacefully at her home on Lookout Mountain in New Salem, GA on September 24, 2019 after a battle with Alzheimer&#8217;s and diabetic complications. Joan was born on April 17, 1931,... View Obituary & Service Information

The family of Joan Hawes created this Life Tributes page to make it easy to share your memories.

Send flowers to the Hawes family.