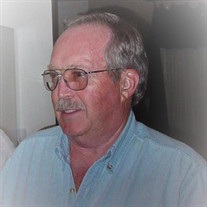 BRYANT, AL.: Grady Eugene Layne, age 81, passed away on Tuesday, May 19, 2020. He was a loving husband, father, Papa, and brother. Grady proudly served his country in the U.S. Army and enjoyed the outdoors, gardening, and being with his family. He... View Obituary & Service Information

The family of Mr. Grady Layne created this Life Tributes page to make it easy to share your memories.

Send flowers to the Layne family.