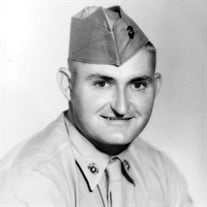 John “Dick” White, 93, of Bryant, AL went home to be with his Lord and Savior on Saturday, July 17, 2021. He was born October 25, 1927, to the late Cleve and Ida White. Dick was a proud United States Marine and Korean War veteran. He lived his life for the Lord and loved his family dearly. If Dick could say one thing to you today it would be, “If you’re reading this, I Love You and hope to see you in heaven someday”. He was preceded in death by his wife of 68 years, Jane White and his parents, Cleve and Ida White. Left to cherish his memory are his daughters and son-in-laws, Kathy and Ronnie Willerson, Darlene and Ricky Addison, Vicki and Ricky Miller; son and daughter-in-law John M and Bobbi White; two grandchildren Richie Addison and Robbie Gant; two step grandchildren, Tracy and Andy McBryar; five great-grandchildren Hunter Gant, Drake Gant, Jessee Addison, Jordan Addison, and Jacob Addison; three step great-grandchildren, Chase, Noah and Easton McBryar; several nieces, nephews, and a host of friends. Funeral services will be held on Tuesday, July 20, 2021 at 1:00 PM EST in the Bryant Chapel of Moore Funeral Home with Brother David Beck and Brother Tommy Crider officiating. He will be laid to rest at Oak Lawn Memorial Park with military honors provided by American Legion Post 106. The family will receive friends on Monday from 4:00 - 8:00PM EST and Tuesday from 11:00 - 1:00PM EST. In lieu of flowers, please consider a donation in John’s memory to the Wounded Warrior Foundation or St. Judes Children’s Hospital.

The family of John "Dick" White created this Life Tributes page to make it easy to share your memories.

Send flowers to the White family.