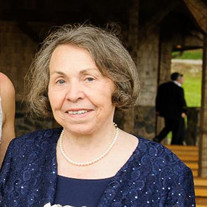 WILDWOOD – Martha “Janet” Hixon, 88, passed away on January 6, 2022 in Chattanooga, TN. She was born in Chattanooga on March 28, 1933 and spent the majority of her life living in Wildwoood, GA, thereafter, with her husband and family. Janet attended Dalton Junior College where she received her R.N. license, and at the age of 56, she completed her Education degree from the University of Georgia. During her collectively 50 year career practicing multiple fields of nursing in the Chattanooga region, she also taught Health Occupation in the Dade County School System for approximately ten years. A self-taught painter practicing multiple mediums, she specialized in oils, and infused her teaching skills and love of art by opening up her own private studio in the 1990’s during which time she gained membership into the Chattanooga Civic Art League and held the position of Director there for some time. Her eldest son, Wes, fondly remembers her easel set up on a gravel bar in the streams of Alaska surrounded by snow-covered mountains as she painted their guide’s prized plane, which is still displayed at the Outfitter’s Lodge. She had a deep love of traveling. Janet and her husband, Jim, traveled to almost every state together, in addition to several vacations to Costa Rica and Canada, and she and her daughter took multiple trips to Europe together. She was preceded in death by her parents, Clarence & Lettye Wilson Cross; her husband of 66 years, James E. Hixon; her daughter, Brenda Hixon Tanguay; six brothers, Ray, Jack, Clarence Jr., Donald, Fred, and Carl, along with three sisters, Mary Ruth, Faye, and Doris. She is survived by her three sons, Wes (Mary Ann) Hixon, Paul Hixon, and Alex Hixon; two granddaughters, Megan (Stu) Thomas and Bailey (Jonathon) Bullard; four great-grandchildren, Cross & Emerson Bullard and Crews & Hadley Thomas; and several cousins, nieces, and nephews. Visitation will be held on Tuesday, January 11th at 3:00 pm, and funeral services will follow at 6:00 pm in the Trenton Chapel of Moore Funeral Home. She will be laid to rest at Lakewood West Memorial Gardens on January 19, 2022 Funeral services will be livestreamed at www.discoverdade.com/moorestream. Visit www.MooreFHS.com to share expressions of sympathy and view her memorial tribute. Arrangements by Moore Funeral Home, Trenton, GA.

The family of Martha "Janet" Hixon created this Life Tributes page to make it easy to share your memories.

Send flowers to the Hixon family.