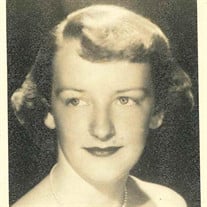 Mattie Belle Spence Barron, 90, passed away peacefully Saturday, December 18, at her residence. She was born April 21, 1931, in Marion, South Carolina. She was preceded in death by her husband Larry Lee Barron, brothers Bryan and Tom, and parents Samuel Alexander Cleveland Spence and Ida Irene Bryan Spence. She is survived by her daughters Anne (Jim) and Beth, brother Palmer (Betty), brother-in-law Wayne (Lamae), sister-in-law Rita, grandchildren Mary (Myko), James, Sarah Spence, and Isabella, and great-grandchildren Henry and Elliott. With the impending arrival of her first child, Anne, Mattie resigned her commission as a 1st Lieutenant in the United States Air Force, where she had served as a nurse. She and her husband Larry, a Lieutenant Colonel in the USAF, then lived in a variety of Air Force bases around the world: Japan, Germany, Arkansas, Oklahoma, Georgia, and Texas. During her husband’s service in Vietnam, she continued her career as a nurse in Marion, South Carolina, and then as an oncology nurse in San Antonio, where Larry ended his career at Lackland Air Force base. They finished their time together on Lookout Mountain, enjoying life with their grandchildren. During her time on Lookout Mountain, Mattie was a faithful member of Lookout Mountain Presbyterian Church, which continued its support through her frequent and loving visitors, Paul and Lynn Jacobs. The family wishes to thank the folks at Garden Plaza of Greenbriar Cove, her sitters from Right-at-Home (Tabitha, Brenda, Gwen, Kierra, Shawanna, and Damary), and the good folks at Hospice of Chattanooga. A graveside service for Mattie will be held at 2:00 PM on Thursday, December 23, 2021 at the Chattanooga National Cemetery, where she will rejoin her husband Larry.

Mattie Belle Spence Barron, 90, passed away peacefully Saturday, December 18, at her residence. She was born April 21, 1931, in Marion, South Carolina. She was preceded in death by her husband Larry Lee Barron, brothers Bryan and Tom, and parents... View Obituary & Service Information

The family of Mrs. Mattie Belle Barron created this Life Tributes page to make it easy to share your memories.

Send flowers to the Barron family.