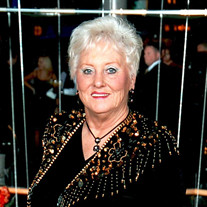 TRENTON, GA: Sherry Elaine Holland-Bates, age 71, passed away August 5, 2019. She was a loving mother, grandmother, great-grandmother, sister, and aunt. She was a member of Canaanland Baptist Church. She was preceded in death by her husbands... View Obituary & Service Information

The family of Mrs Sherry Elaine Holland-Bates created this Life Tributes page to make it easy to share your memories.

Send flowers to the Holland-Bates family.