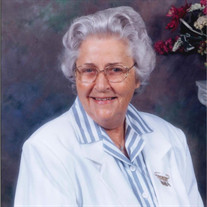 Theora Bowling Rogers, age 90, went home to Jesus and her husband, John, on Saturday, April 2nd. Mrs. Rogers was born October 3, 1931 in Geraldine, Alabama to Terry and Ola “Minnie” Bowling. She married John on May 18, 1947. They started their lives together in Ider, Alabama. Mrs. Rogers was a devoted and loving daughter, sister, wife, mother, and grandmother. She had a passion for flowers, hummingbirds, and wanted only the best for her family. Mrs. Rogers moved to Miami, Florida in 1969 where she and John opened Rogers Furniture. They prospered and at one time, they owned eight stores from Ft. Lauderdale to the Keys. It was a family business where their children and grandchildren also worked. After John passed away, she moved to Trenton, Georgia to be near her sisters. Along with her parents, she is preceded in death by her husband of fifty years, John L. Rogers; son-in-law Bruce M. DeVay; two sisters and 2 brothers. Left to cherish her memory are her children, Jimmie (Pat) Rogers, Judy (Ray Styles) DeVay; grandchildren, Angie (Mike) Stephenson, Lewis (Laurie) DeBoard, Jimmie Rogers, Jr., Joel (Sharon McBride) Rogers, Dede (James) Stephens, Damon DeVay; eight great-grandchildren; four great-great-grandchildren, and she was excited about two more blessings on the way; sisters, Fay Thurmond, Lorene Shaw, Bea (Freddy) Shaw; brother James Isaac (Linda) Bowling; nieces, nephews, and a host of friends. Funeral services will be held in the Trenton Chapel Wednesday, April 6, 2022 at 11:00 AM with Brother Randy Tinker officiating. She will be laid to rest at Hamilton Memorial Gardens. The family will receive friends Wednesday, 9:00 ~ 11:00 AM. The funeral service will be livestreamed at www.discoverdade.com/moorestream. Visit www.MooreFHS.com to share expressions of sympathy and view her memorial tribute. Arrangements by Moore Funeral Home, Trenton, GA

The family of Theora Rogers created this Life Tributes page to make it easy to share your memories.

Send flowers to the Rogers family.